Discover most of France in 6 days.
Paris “the city of love”, the Loire Valley and its fabulous castles, the famous Mont Saint-Michel and Normandy.

Arrival in Paris
Reception on arrival (airport or train station). Transfer and installation at the hotel in the city center. Free time for dinner

In the morning, departure for the Loire Valley and visit of the Château de Chambord; considered the largest and most majestic of the Loire Valley Castles, this Renaissance flagship was built at the request of François I to serve as a hunting lodge.

However, he actually only spent 42 days in his 32-year reign. The 365 fireplaces, 440 rooms, 14 staircases or 800 capitals will give you a glimpse of the splendor of this era. The main curiosity remains the famous double revolution staircase attributed to Leonardo da Vinci, famous because it allows two visitors to take it without ever crossing each other. Continuation to Blois, walk in town and departure for Tours. Night at the hotel.

The second day begins with a visit to Château d’Amboise, an essential stopover in the Loire Valley, which became a royal residence during the Renaissance under the reigns of Charles VIII and François Ier. Occupied by the powerful French court, the monument attracted artists from all over Europe. Among them, Leonardo da Vinci, whose 500th anniversary of his death was recently celebrated (1519-2019). Invited by the King of France, the Italian genius will spend three years at his side and will be buried in the castle upon his death. His burial is still visible in the Saint Hubert chapel. The royal castle of Amboise has an exceptional collection of furniture, testifying to the artistic refinement of the first French Renaissance. We will then head to the Château de Chenonceau: built on the plans of a Venetian palace in the 16th century, the Château de Chenonceau, with five arches elegantly spanning the Cher, is the only castle-bridge in the world. Nicknamed the Château des Dames, its history has been marked, among other things, by that of five women, five great seductresses or women of power: Diane de Poitiers, Gabrielle d’Estrées, Louise de Lorraine, Louise Dupin and Catherine de Médicis. These women, in turn, embellished, protected, restored, saved … After lunch, departure for Rennes, a panoramic tour in this city, continuation to Saint-Malo. Saint-Malo is undoubtedly one of the most endearing towns in Brittany: it is the jewel of the Emerald Coast, at the heart of a region with dazzling tourist development. Discovery of the most beautiful views of the bay of Saint-Malo. Then visit the ramparts and the interior of the city of Saint-Malo, evoking the prestigious past and the famous men who made Saint-Malo a unique city. Main topics covered: privateers, the phenomenon of the tides, the attacks of the English, the reconstruction of the city after the Second World War. Night at the hotel.

A morning entirely devoted to the discovery of Mont-Saint-Michel, which welcomes tourists from all over the world every year. This rocky islet in the Manche department, a stone’s throw from Brittany, has as a backdrop a lovely bay where the sea and the Couesnon meet. The most frequented tourist site in Normandy, it is one of the ten most visited in France. The Abbey of Mont-Saint-Michel is a UNESCO World Heritage Site. Free time for lunch then departure for the D-Day landing beaches which are must-see getaways in Normandy. There are many places of memory, cemeteries and museums that allow this tragic period of history to be relived. The beaches of Sword Beach, Juno Beach, Gold Beach, Omaha Beach and Utah beach are still popular with tourists from all over the world. This June 6, 1944 marked the history of Normandy and the world. Even today, visitors can relate to these sites: emotions guaranteed. Then, departure for Honfleur, the most charming of the small Norman ports … Since the 19th century, Honfleur has been the favorite place for writers (Baudelaire, Flaubert …), musicians and painters (Boudin, the child of the country, but also Monet, Dufy, etc.), seduced by the changing light of the mouth of the Seine and by the greenery of the Auge countryside. Crossing the Pont de Normandie, which is the last footbridge over the estuary of the Seine. With a total length of 2,141 meters, almost the equivalent of the Champs – Elysées, it links Le Havre to the surroundings of Honfleur. Night at the hotel.

In the morning, a walk to discover the Vieux Bassin bordered by tall and narrow houses, the quays, the port and its old trawlers, the cobbled streets, the very attractive half-timbered houses, the Lieutenancy and the Sainte-Catherine church, the largest church in France built entirely in wood. Then, departure for Rouen: a true city-museum which leaves no one indifferent with its beautiful half-timbered houses, its cobbled streets and its Gothic churches. with its imposing Gothic cathedral and its many alleys with half-timbered houses preserved in the city center. It is also walking in the last footsteps of Joan of Arc who was imprisoned there, tried and burned alive on the Place du Vieux-Marché, making the young martyr the emblem of the city. Located between Paris and Rouen, Giverny is an obligatory stop during a stay in Normandy for art lovers. Famous for its Museum of Impressionisms and the house of Claude Monet, this Norman village is one of the must-see getaways in Normandy. Having lived 43 years in this house in the Eure department, Claude Monet drew heavily on his garden, which is still very well preserved today. After this last visit, on the way to Paris. Night at the hotel.

Breakfast at the hotel. Depending on the flight schedule, transfer to the airport. Assistance with formalities and flight. 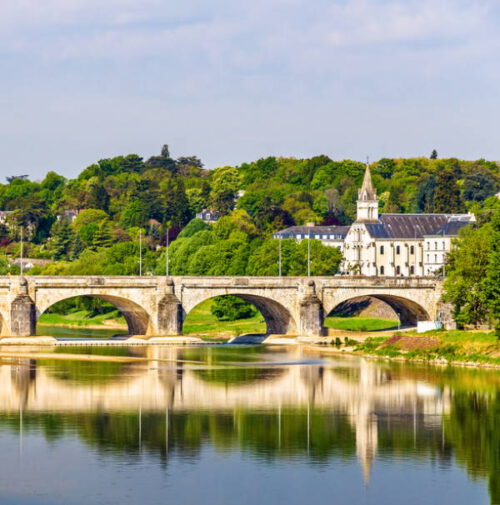 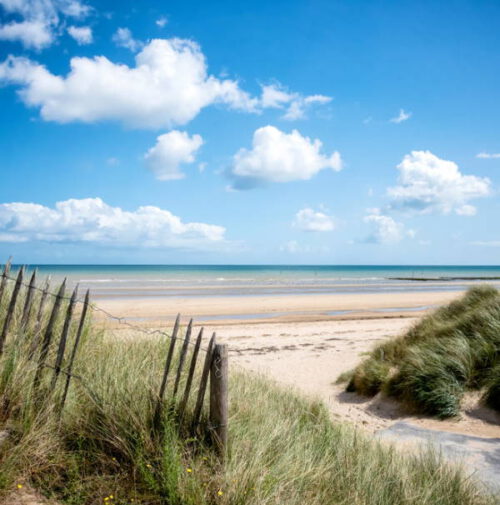 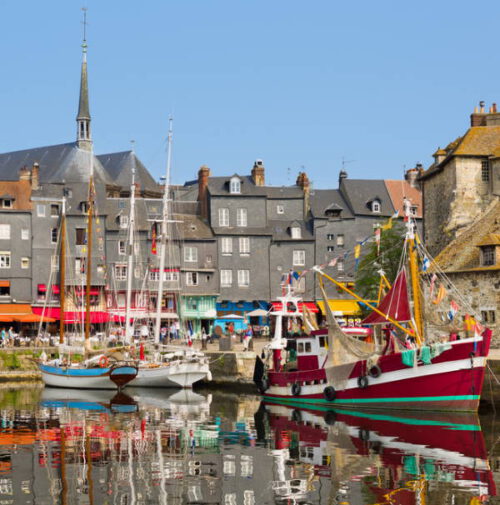 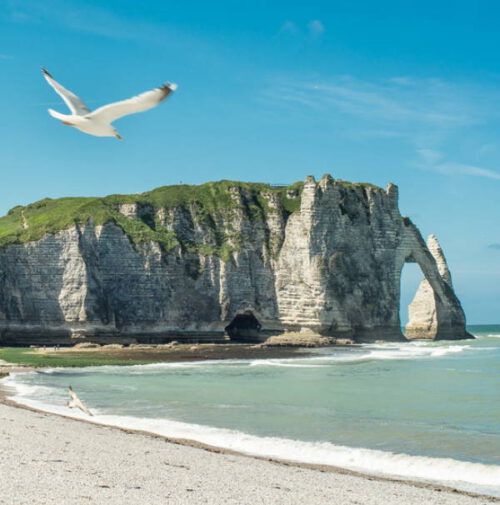 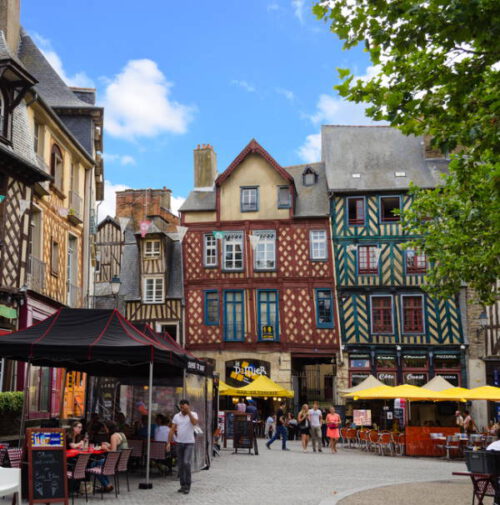 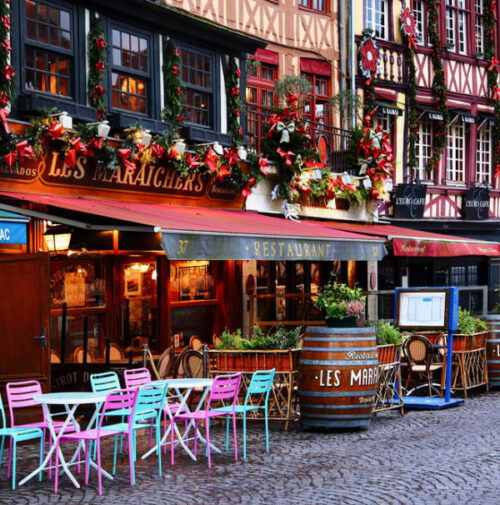 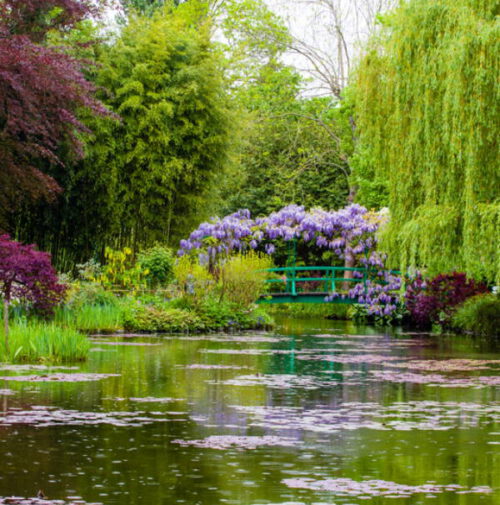